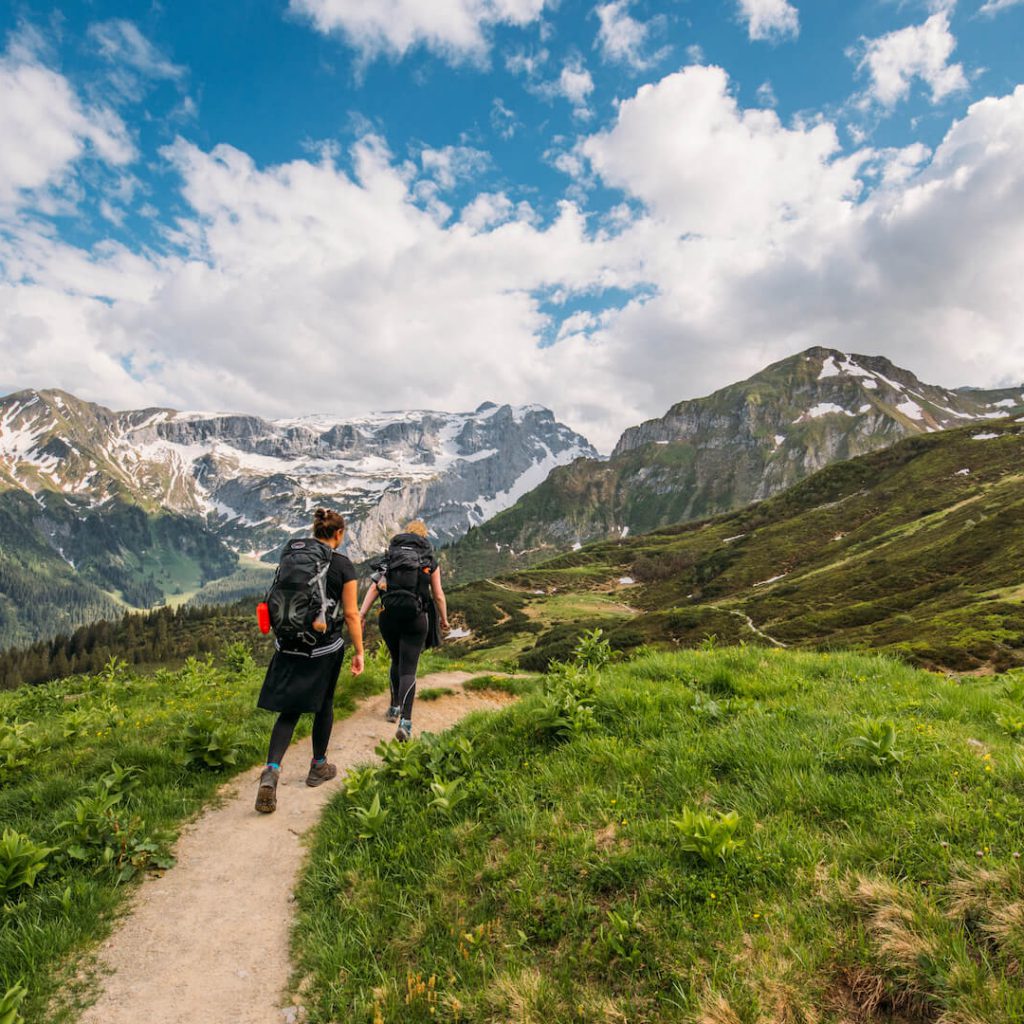 From the Lünersee via the Golm to the Lindauer Hütte

It took us long to finally make a decision whether the hike was possible due to the remaining snow. In the end, we said, we will try it and should the conditions get too bad, we are prepared to turn around at any time.

From the Lünersee we continued toward the East up to the Lünerkrinne. After about 45 min, we reached the highest point of the day – the Lünerkrinne with 2155m. But with no means was this the end of hiking uphill. The hike to the Lünerkrinne was possible to hike without bigger problems. We had to cross some minor snowfields. From the Lünerkrinne, we continued downhill towards the Alpengasthof Rellstall, which is on 1465 meters. Behind the Alpengasthof Rellstall, we started to climp up again towards the Golm. The climp was rather step but the way led us through a beautiful forest. The forest provided us with some well-deserved shade.

At the Golmer Bergstation, we rewarded ourselves with some nice and cold drinks. Afterwards, we continued our hike along the Alpkultur Weg, which follows the Gauertal all the way to the Lindauer Hütte. The Alpkultur Weg is a nice hike for the whole family as one only has to hike uphill for a very short time. The Alpkultur Weg as still as beautifull as it was a couple of years ago when we have been here the last time. When walking towards the Lindauer Hütte one has an amazing view on the rocky Sulzfluh and the Drei Tüme, which makes hiking even more beautiful. We were lucky enough that the sun came out again just before we arrived at the Lindauer Hütte.

The Lindauer Hütte lies beautiful at the end of the Gauertal on 1744m. Behind the Lindauer Hütte the rock mountains are reaching up high. The Lindauer Hütte is a rather large and modern mountain hut. The hut has just been renovated, which gives it the modern style but during renovation it also lost a little of the old charme, which other huts are well-known for. We ended the day on the terrace with a beautiful weather, delicious food and cold drinks. A perfect ending of a great day!

The first gaze out of the window in the morning was not promising, the clouds were hanging low in between the mountains. But first it was time for breakfast and may be the clouds will clear away.

Sadly, this was not the case today. So, we started hiking to the Öfapass with low hanging clouds. It was not even possible to see the Öfapass from our starting point but the sight got a little better during the day. We discussed our plan to hike to the Lünersee via the Öfapass and the Verajoch with the inn keeper the night before. He told us that the trail is accessible but should be aware that we might have to walk on snow 60% of the way. Therefore, we were prepared for what lay ahead of us.

Walking slowly uphill from the Lindauer Hütte we passed by a little alp. In the beginning the trail was rather wide but bit by bit it turned into a small path. Up to 1800m, the snow was not much at all and the snowfield that were in our way could easily be surrounded. Afterwards the big snowfields began and it was no longer possible to walk around them. After our first break, a rather big group of 8 people passed by us, which was really nice because now we only had to follow their tracks. This was so much easier because now you do not have look out for the best possible way anymore and could only concentrate on not hiking and making sure not to slide away. The first goal, the Öfapass, always ahead of us, we hike through the large snowfield until we reach the Öfapass after a good two-hour hike. At the Öfapass, we ate our second breakfast. Hiking on snow is more challenging because you have to keep your concentration up all the time to make sure that you don’t slide more often.

From the Öfapass we hike downhill for a while to the Schweizer Tor. Walking downhill through the snowfields was not as difficult as I first thought it would be. The trick was to only walk on you heels. It looks a bit funny but it worked.

The Schweizer Tor is a gap in the mountain range or a ‘Tor’, which means door in German. Normally, one has a beautiful view on the Swiss side of the mountain range through the Schweizer Tor but today the sight was quite bad and we only saw clouds. There are three possible ways to get to the Lünersee from the Schweizer Tor, passing through the Schweizer Tour and hiking on the Swiss side of the mountain range, hiking towards Rellstall and then to the Lünerkrinne, the way where we came from yesterday or hiking via the Verajoch to the Lünersee. We decided to take the last route. So, first we needed to hike uphill again to the Verajoch. The snowfield that we needed to cross were not that large anymore and from time to time it was possible to hike on the normal hiking trail. Down from the Verajoch to the Lünersee the picture should not change much. We continued crossing snowfields and from time to time hiked on the hiking trail. We had to cross the snowfields parallel to the mountain to get back on the hiking trail, which was rather difficult.

After about 5 ½ hours, we reached the Lünerseealpe at the Lünersee. Now we needed to surround the lake half and then we finally made it to the Douglas Hütte. The trail around the lake was partly still covered on snow wherefore we needed to continue walking on snow. But after another half hour, we arrived at the Douglas Hütte and treated ourselves with some very delicious Käsespätzle. 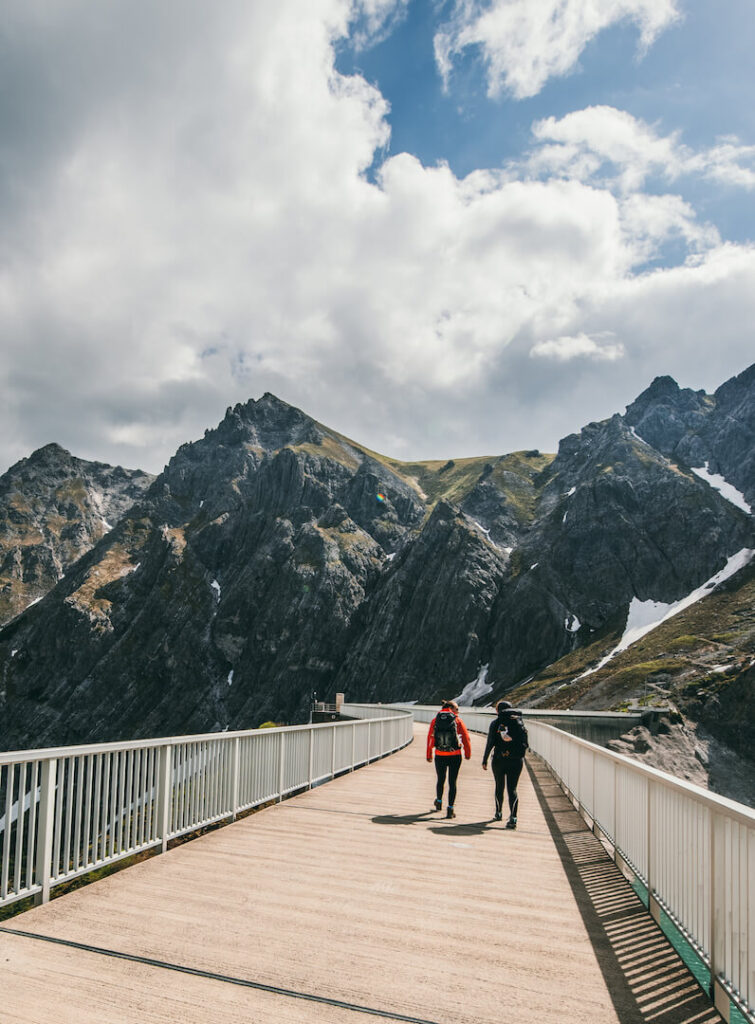 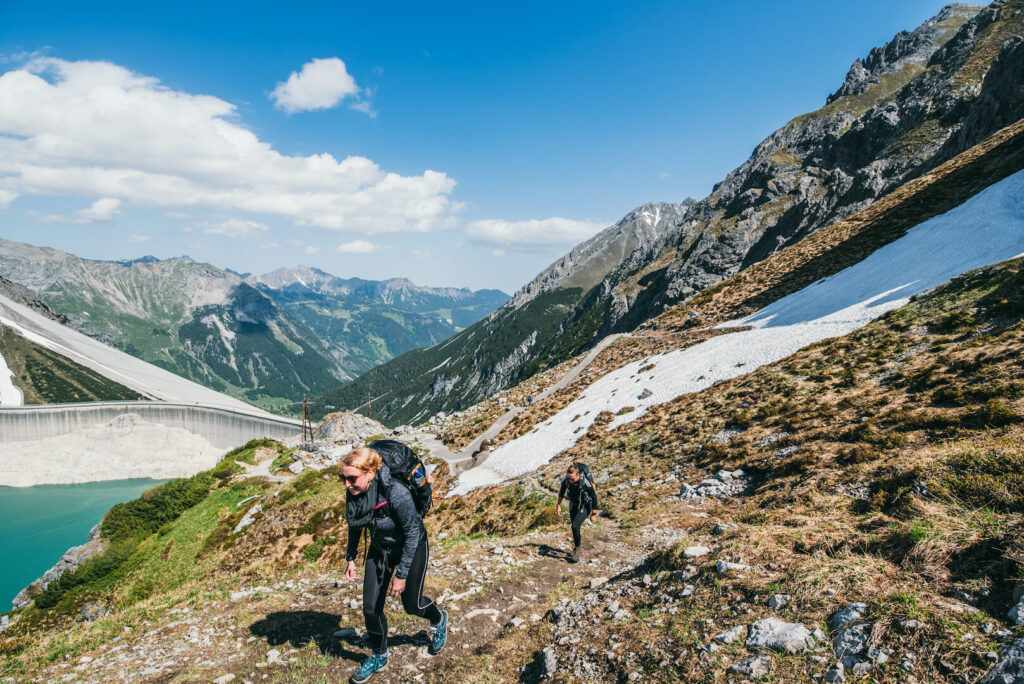 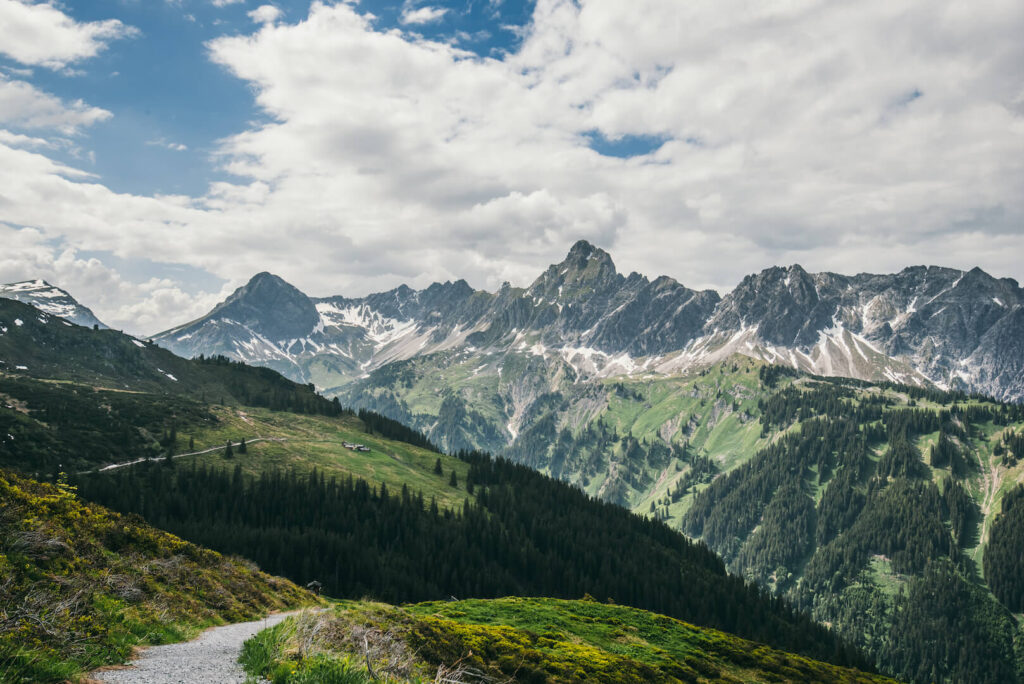 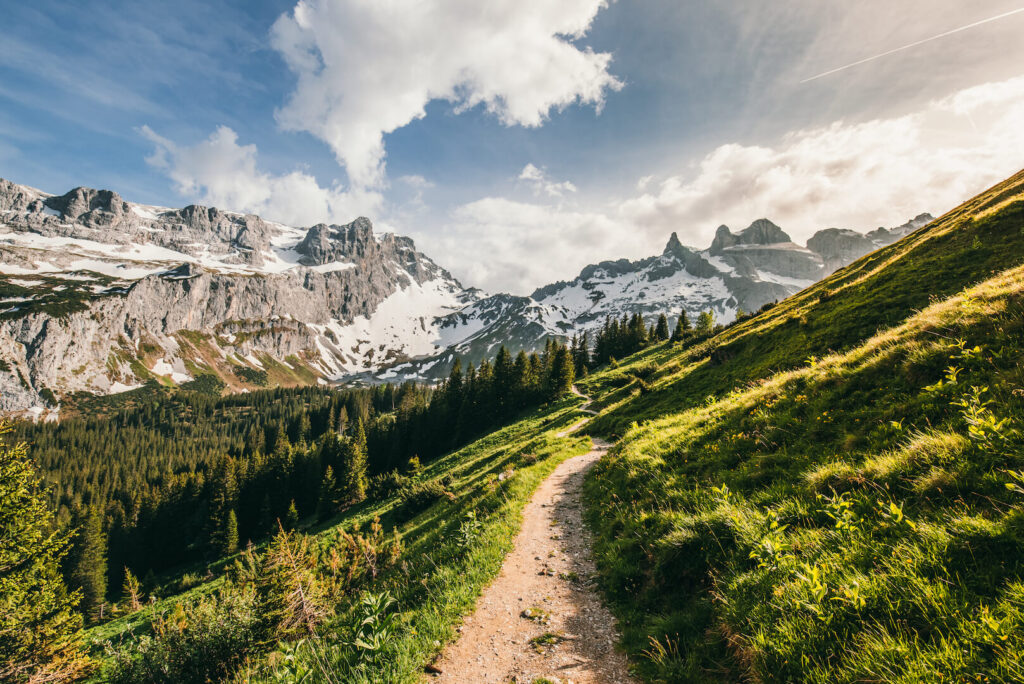 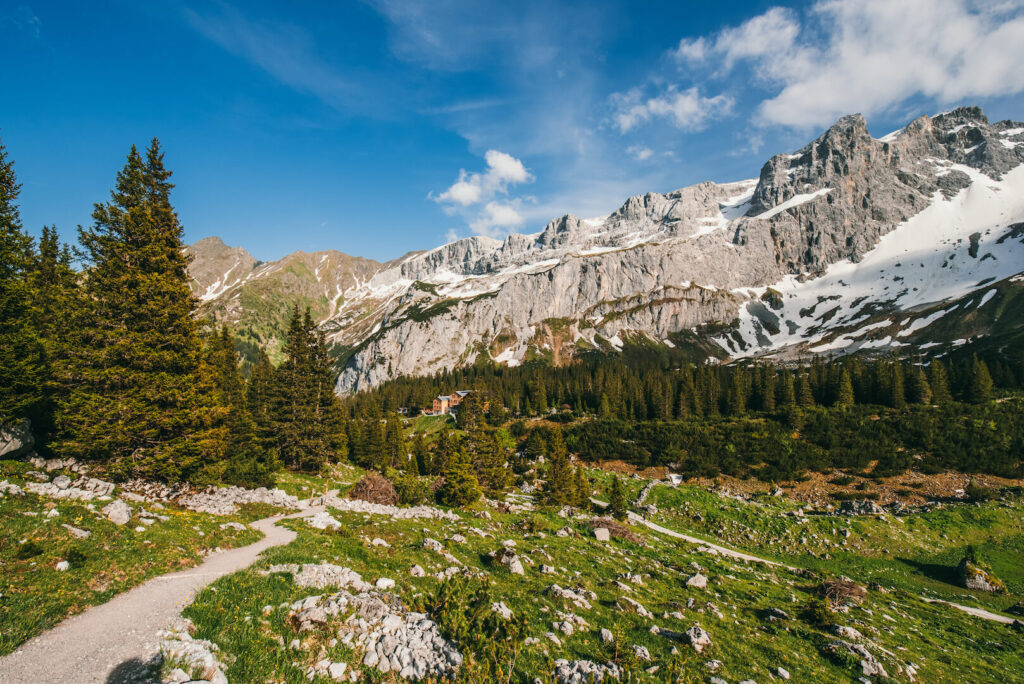 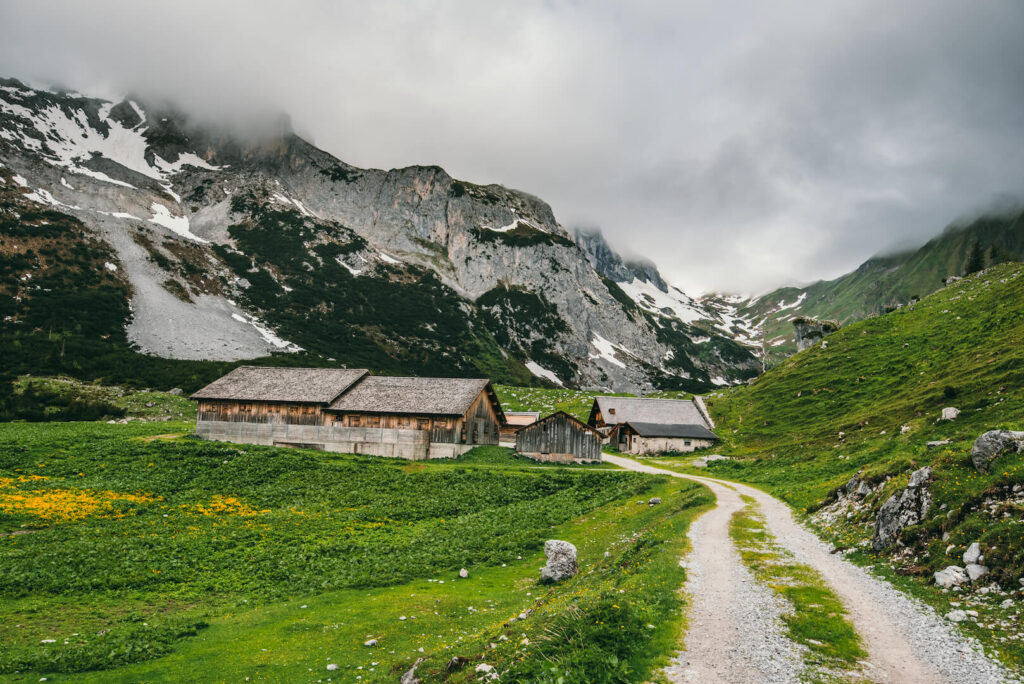 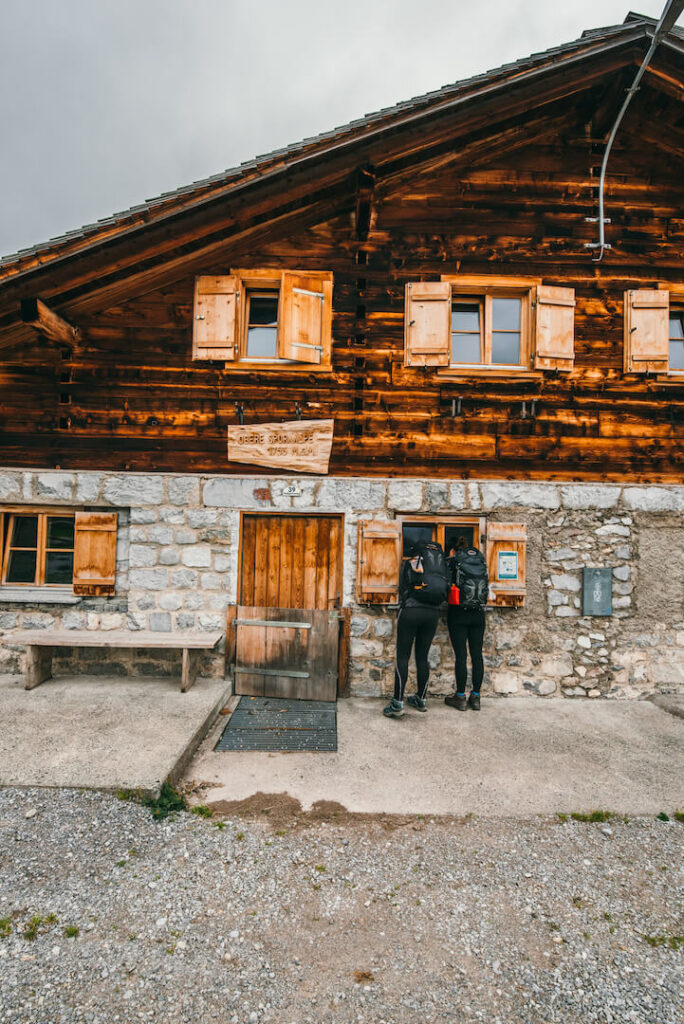 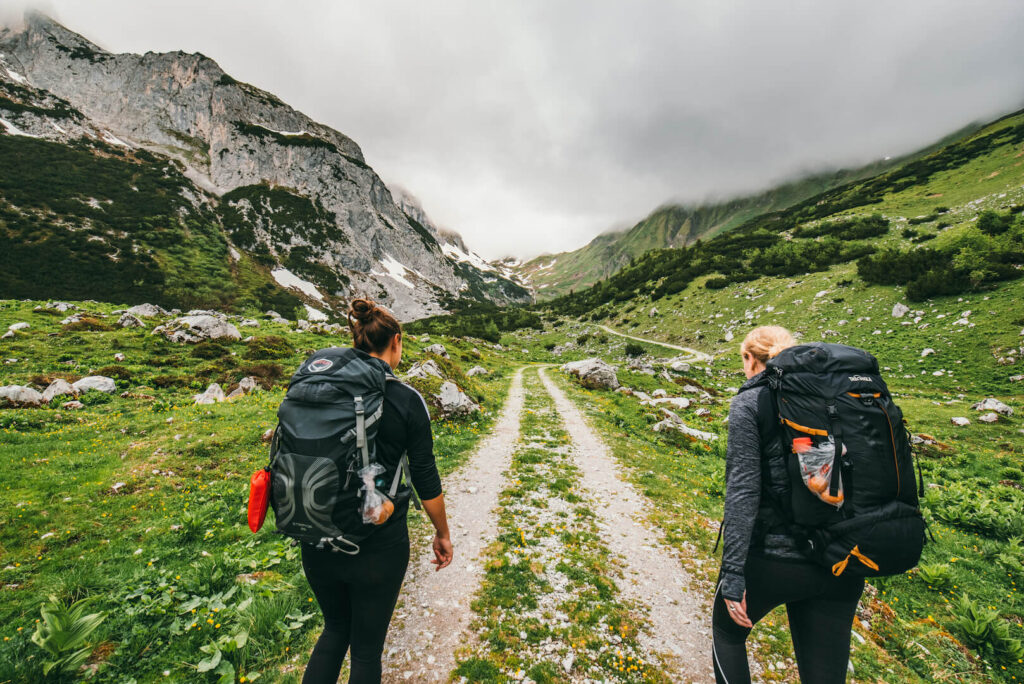 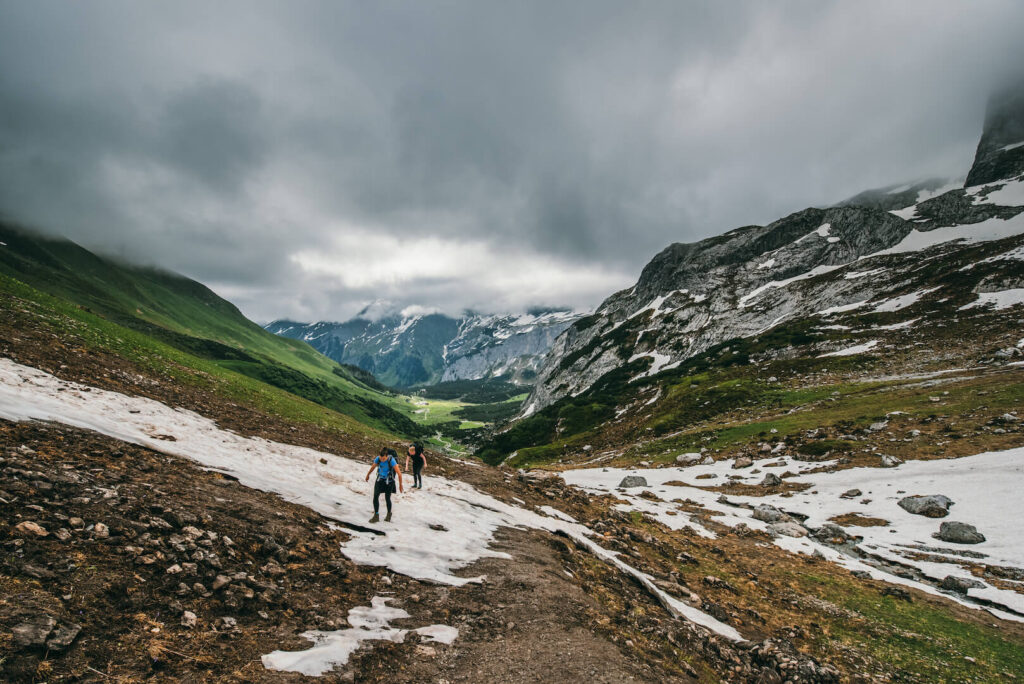 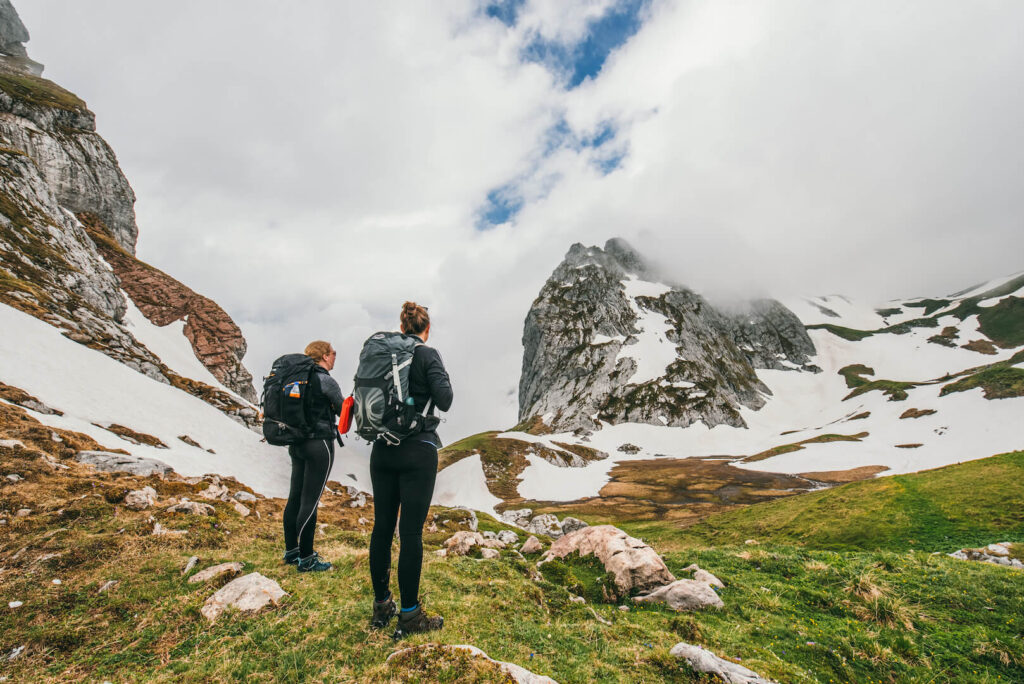 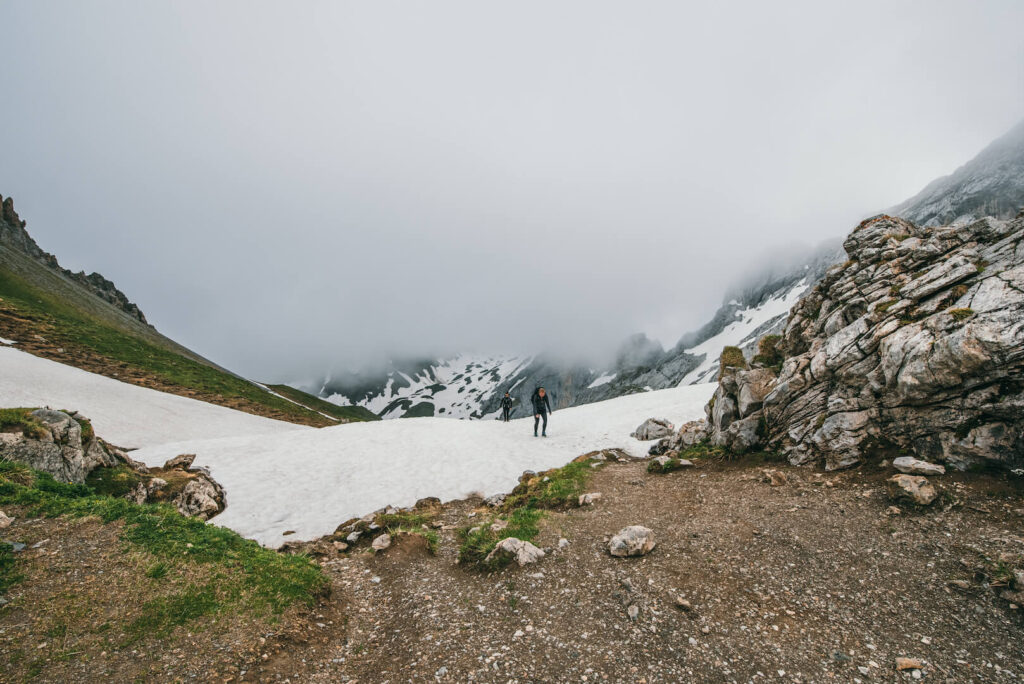 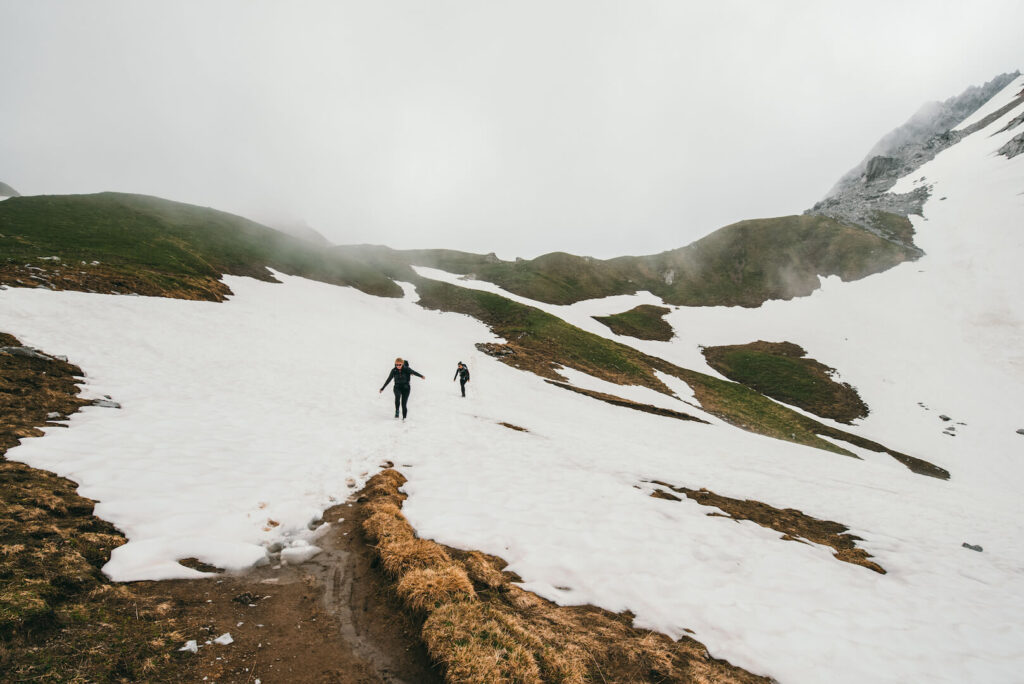 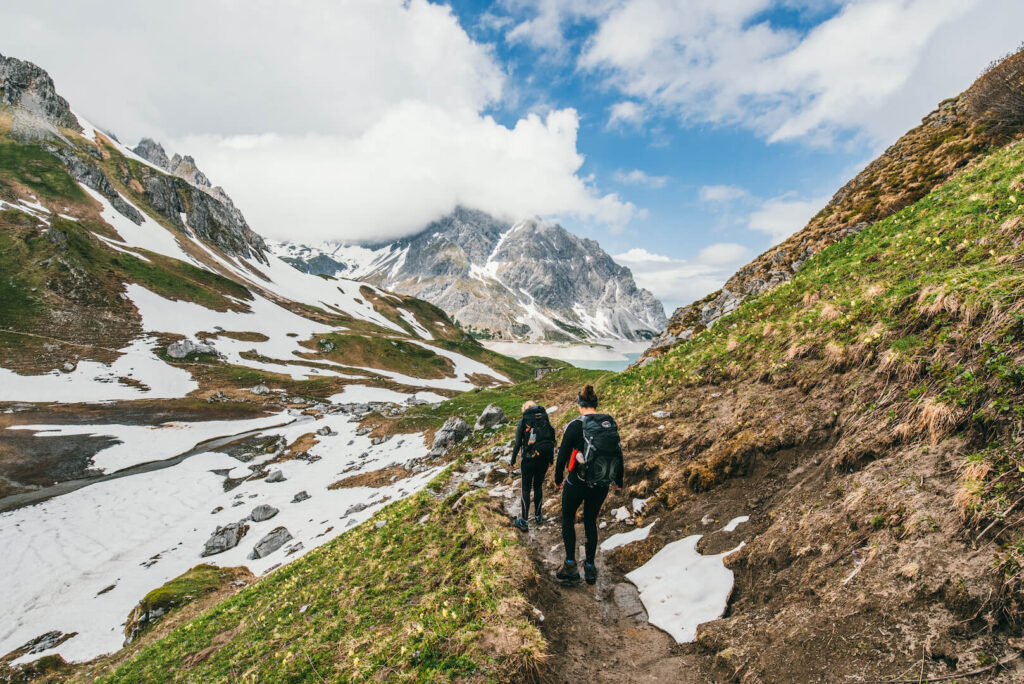 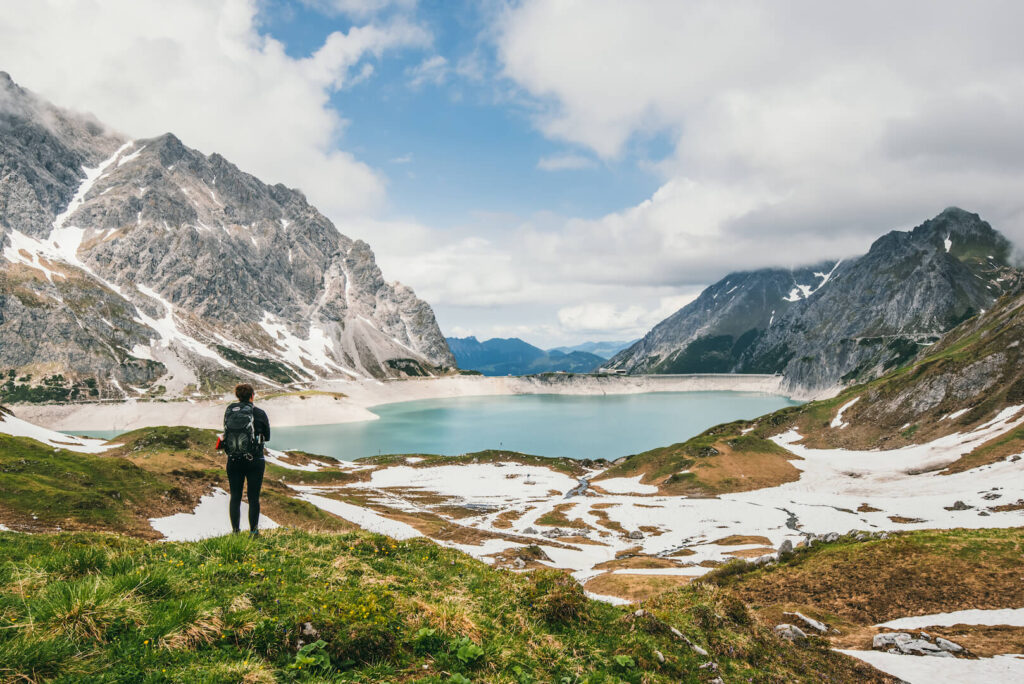 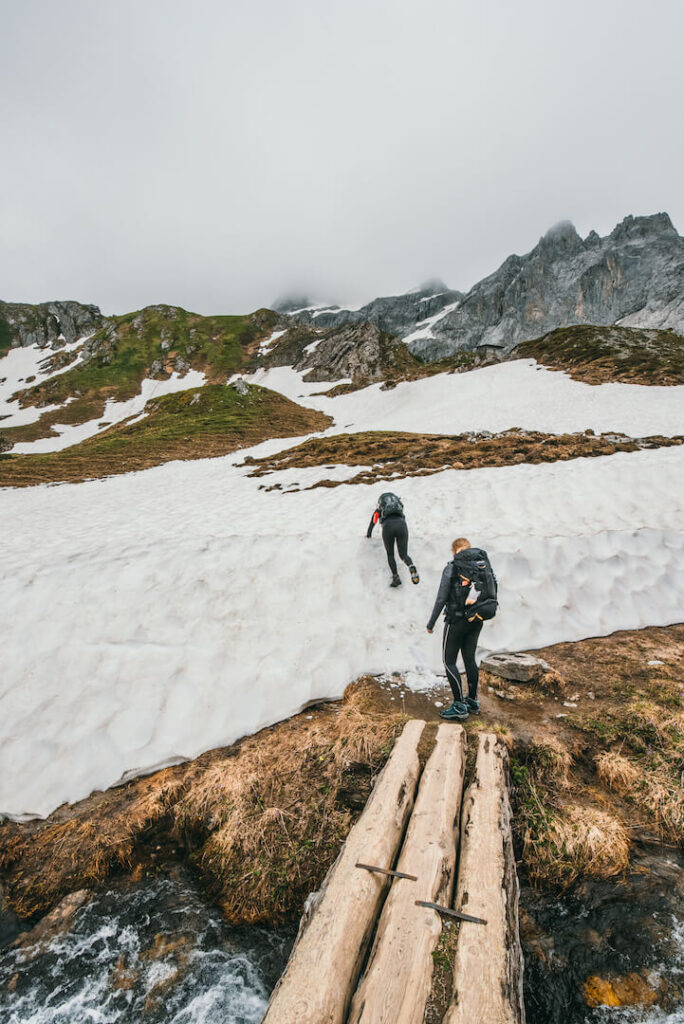 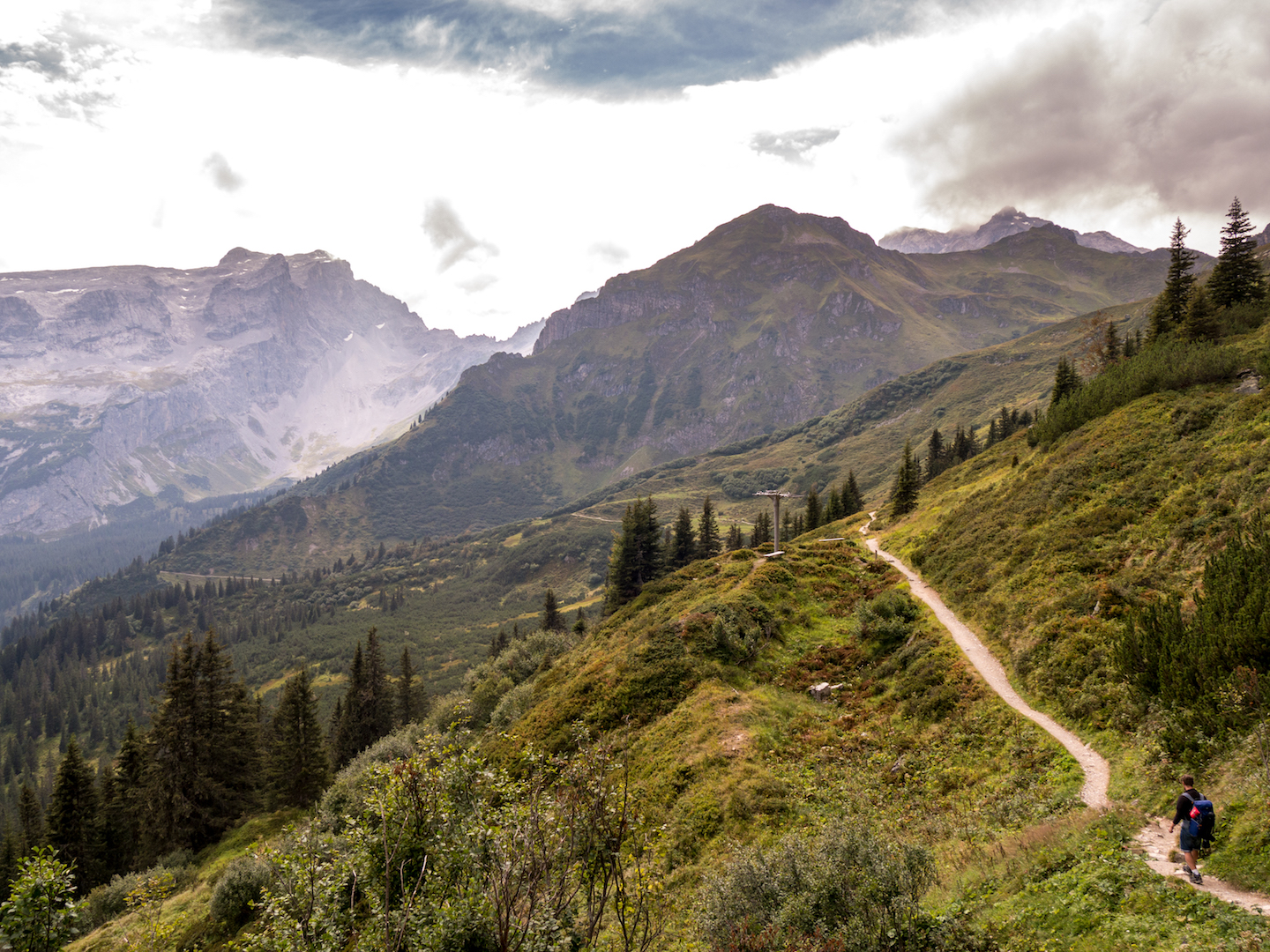 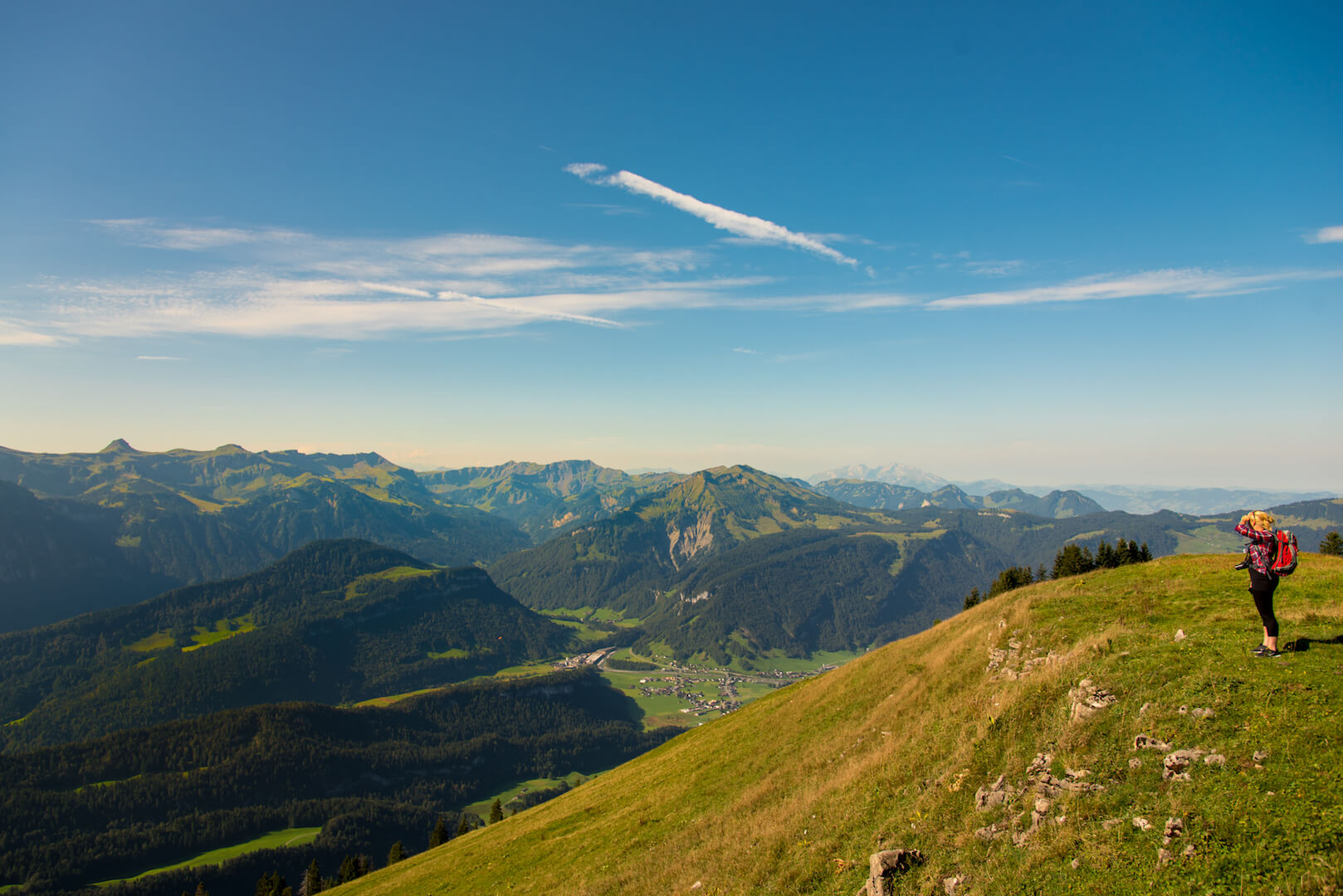